Copenhagen and Norway: our last trip before moving back to Seattle 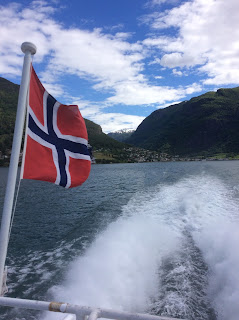 Once we decided to move back to Seattle on June 30, thereby avoiding having to pay Italian tax (less than 183 days in Italy = not a tax resident), we planned a marathon of travel, trying to get to as many places on our list as possible:  Spain, Greece, Berlin, parts of Italy, and finally, Copenhagen and Norway, which lived up to their reputations:  beautiful, full of reserved but friendly English speaking citizens, and incredibly expensive.

Our first clue that we were not in Italy anymore was the plane ride--very quiet and no clapping when the plane landed, plus, everyone filed off the plane silently and in order, without trying to get ahead to be first out the door.  The train ride to Copenhagen was a similar experience--silent, no one on a cell phone, no one taking up more than one seat--it was a little eerie but the train was highly convenient, quiet and clean, just like the city itself.  No graffitti, no littering, beautiful modern buildings, and a great public transit system.  People were friendly and willing to help with directions and restaurant recommendations, and often volunteered information on "must see" attractions.

During our 5 days in Copenhagen, we walked all over the city, visited parks, museums, took a canal boat ride, and spent an evening at Tivoli Gardens, and did a day trip to Riskolde to visit the Viking Ship museum (a highly recommended side trip).  We also tried Danish beer and the popular open face sandwiches which are served everywhere.  It would be very easy to spend twice as much time there without running out of things to see and do. 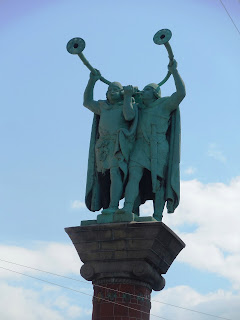 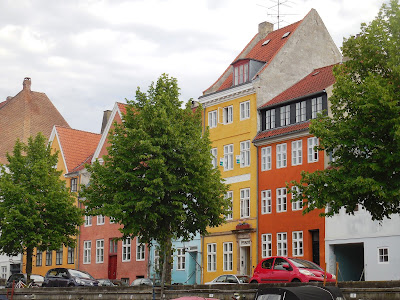 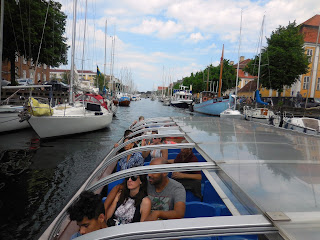 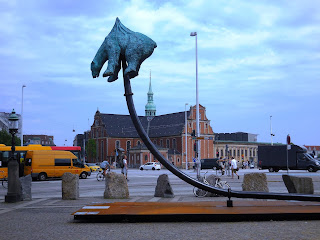 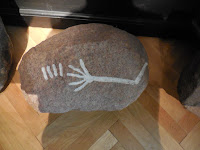 Tivoli gardens is the second oldest amusement park in the world, opened on August 15, 1843, and the second most visited theme park in the world (second presumably to Disney).  It is much more than rides and fair food however.  There are multiple stages with many free performances (we saw a pantomime on the Peacock stage), as well as performances by touring stars, and by local and international dance companies and symphonies.  There are beautiful gardens, fanciful buildings, fine dining restaurants (I had the best pork chop of my life at one of them), and a funky light and smoke show every evening at 11:00.  It is a great place to spend an evening enjoying the summer weather and long evenings, and to watch Danes (and tourists) enjoying themselves. 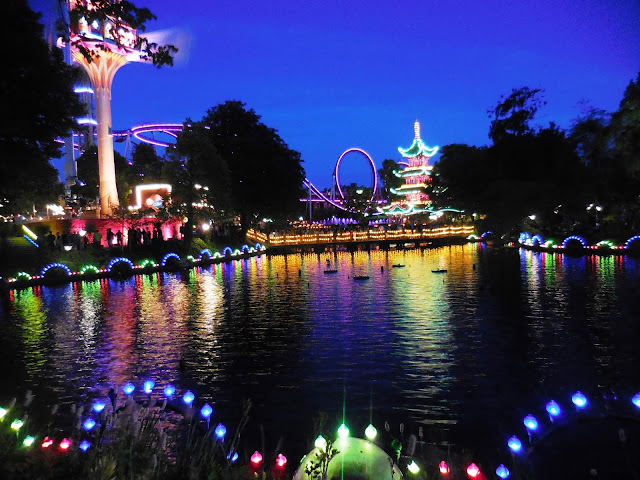 It was a short (25 minute) train ride to Riskilde to visit the Viking  ship museum and the charming town.  Even if you are not interested in the ships, it is a good day trip because it is a chance to see a small town outside Copenhagen.  It is a pleasant stroll from the train station through the town to the old cathedral where 39 kings and queens are interred, then through a park to the museum which is on the water.  Five Viking ships were sunk in the harbor for defense purposes, recovered in modern times, and restored over many years. There are also replica ships large and small, workshops where you can watch craftspeople making rope, sails, etc. using the same tools the Vikings used, and a cafe that serves some pretty good food (we tried the 'Viking platter', five types of typical Norwegian food.  Yum.)  You can even row one of the replica ships if so inclined. 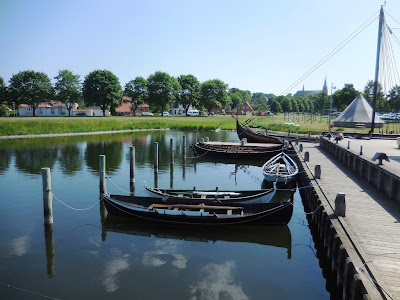 Of course no trip to Copenhagen would be  complete without a visit to Christiania, a city within a city, started when hippies squatted on unused land in the 70s.  At the time, the land had little value and no one cared.  Now, the land is very valuable, but the commune lives on.  It is self regulating  but buys electricity and water from the city.  Residents build homes but do not own the land the houses sit on, that belongs to the community.  When someone moves out, the community decides who may move in.  There are many, many tourists, some of them apparently quite titillated by the sight of people openly selling marijuana on aptly named "Pusher street."  The vendors wear scarfs over their lower faces and there are signs posted saying no photos and no running (it makes people nervous).  No hard drugs are allowed, as represented in one of the two symbols of Christiania. 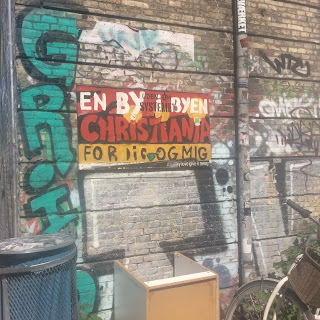 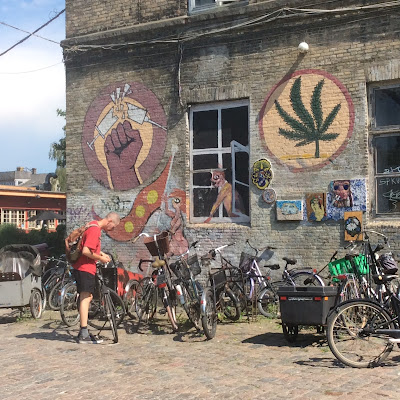 After a 55 minute flight we arrived in Oslo, Norway where we met Kelly at our hotel, Ellingsen's Pensionat.  Like Copenhagen, it is easy to walk to all the main attractions in Oslo, especially when accompanied by a FitBit fanatic!  Oslo is a pleasant, clean city with a lot of public spaces, parks, and museums.  Like Copenhagen, much of the architecture is new, and there is little over 150 years old because the city was built with wood and suffered many fires.  We were introduced to some new artists, went to more ship museums, and enjoyed wandering around the city.  We visited the National Museum on our first afternoon to see Norwegian artists as well as a small but impressive collection of impressionists and modern art.  The most popular spot was "The Scream" by Munch, the most famous local artist.  It was amazing to watch every tour group troup by and stop for pictures in front of the painting making the 'scream' face.  There were any other works by Munch, demonstrating his range, interesting for those of us familiar only with the Scream. 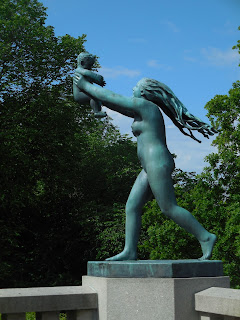 We took a ferry to a nearby island to visit another Viking ship museum, the From museum (voted the best museum in Norway, dedicated to the polar expeditions on the ship Fram, and the Kon Tiki museum.  The Viking ship museum here was not as interesting as the one in Copenhagen, but the Fram museum  lived up to its reputation.  You can explore the actual boat used in the expedition as well as seeing many exhibits and interactive displays. 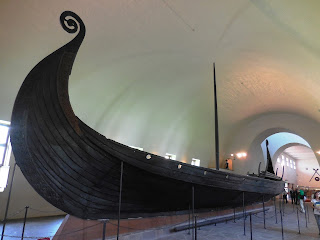 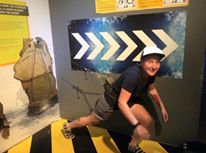 Kelly enjoyed the children's section at the Fram, pulling 200 kg to test the effectiveness of her work-out regimen.


Back on the mainland, we visited the modern art museum, located in a striking building on the waterfront with a a municipal swimming area in front of it.

From Oslo, we started on a modified version of "Norway in a Nutshell," leaving the Oslo station at 6:35 for a 5 hour train ride through magnificent scenery to Flam, where we transferred to a small train for a 12 mile, hour long trip through the mountains to Balestrand, a small town on the Sognefjord. 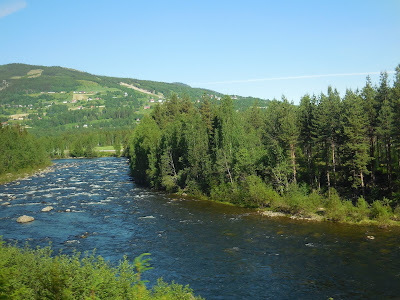 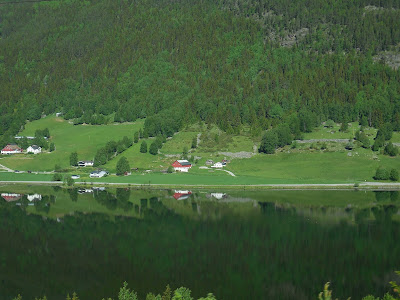 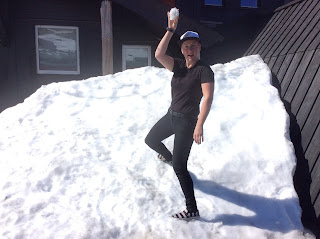 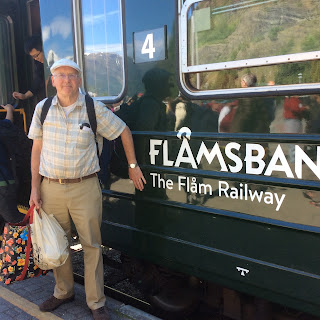 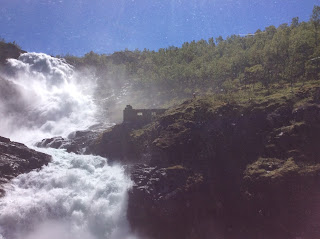 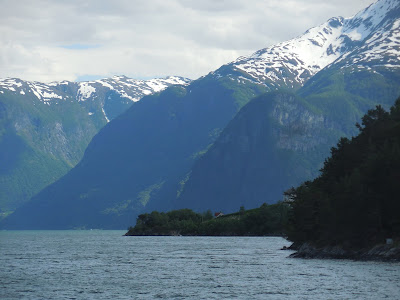 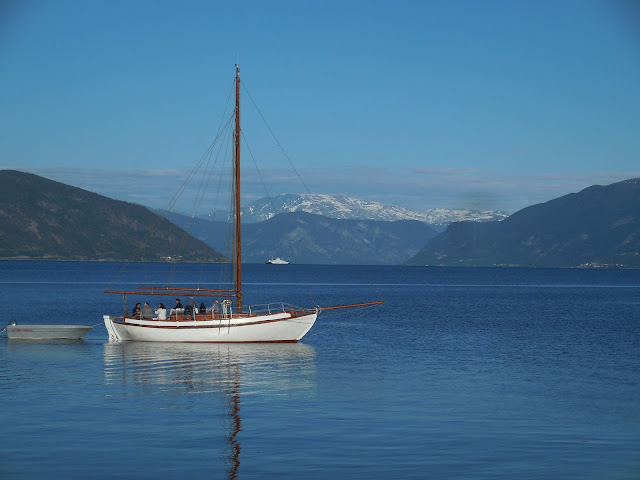 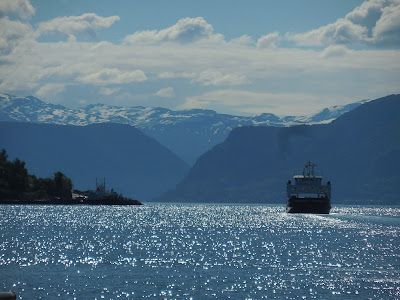 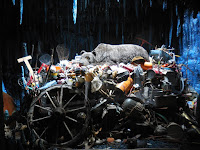 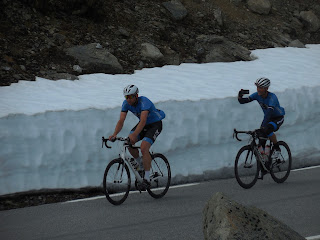 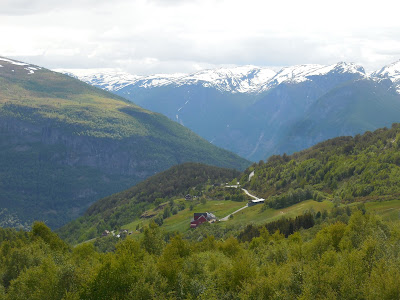 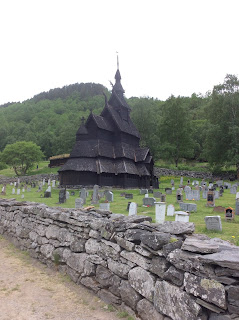 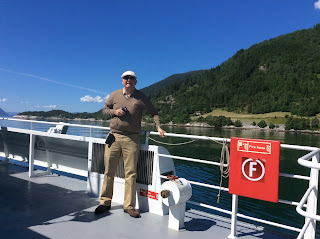 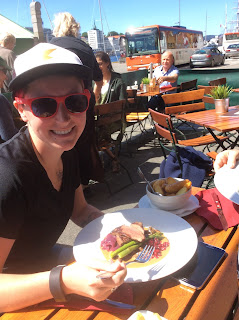 We arrived back in Arezzo just in time for the biannual Giostra di Saracino, won this year by Santo Spiritu.  Check out the Arezzo website to see how seriously the Arrezzini take their giostra.

Useful links for retiring and living in Italy